It’s an understatement to say that Decathlon is behind the electric ATV.While some bicycle designers are in their third generation of VAE, the French sports specialist is just dusting off its first entry-level model.The V2 of this e-ST500 is actually a fairly light evolution of an ATV that was already in the store’s catalogue.Neither the frame nor the design have evolved.The new model essentially features a new control screen and a new electric controller that is supposed to provide better performance and “smoother pedaling”.This evolution is actually an attempt to correct the first e-ST500 of the name and follows rather mixed comments from its followers.

The e-ST500 therefore has the same well-finished “aluminium” frame, which is rather pretty in its black and blue tones.The 27.5-inch wheels and relatively thick tubes give a massive impression that is not contradicted by the weight (23 kg).However, the design is still quite correct for an entry-level VTTAE.Nevertheless, there are some rather rough finishes and a significant amount of plastic, especially on the battery mounting system, which it is doubtful that it will age properly.The integration of the battery is also quite basic, but that’s quite normal at this price level.Indeed, for semi-integrated batteries you have to count at least 1000 euros more than the traditional competition.

The control screen is the main external development compared to V1.This new display is discreet but also of a relative quality.It is still a basic LCD display that provides the most useful information such as instantaneous speed, range or assistance level.The main difference with the old screen will not necessarily be to the taste of the consumer since Decathlon has chosen to do away with the USB port that was integrated into it.It will therefore no longer be possible to charge your smartphone on your ATV.The cycle specialist would have made this choice for reasons of reliability.Indeed, on the first version, the control screen suffered from water infiltration (via the USB port) and a certain overall fragility.The new screen is still as basic and finally quite poor from an aesthetic point of view but it would gain in reliability what it loses in practicality.Obviously, our three weeks of testing and some 200 km covered are not enough to validate these claims.

We have also remained hungry in terms of transmission.This is simply the main weak point of this e-ST500 v2.Decathlon has opted for an entry-level system, Shimano’s Altus.It’s a choice that seems logical for a mountain bike at such an attractive price but unfortunately does not match the choice of electrification.Indeed, the Rockrider is a pain in the neck on all fast gear shifts or when the pedal is a bit heavy.A defect that can be easily corrected by keeping one’s hand on the gear lever but which forces the rider to concentrate on the transmission when it should be managed by instinct.A good frame is not enough to make a quality power-assisted ATV.The choice of equipment is essential and on an entry-level model everything is often a matter of compromise.This is undoubtedly the logic that prevailed in the choice of brakes.Between entry-level hydraulic disc brakes and a more sophisticated mechanical version, Decathlon has opted for the second option.This choice is economically justifiable, but much less justifiable from an athletic point of view.Indeed, if the performances are quite close (on dry ground at least) the feeling of progressiveness in braking is not at the rendezvous with this mechanical model, which is a handicap on a somewhat demanding track.By way of comparison, the most serious competitor of this e-ST500, the Intersport Nakamura E-Summit 710, has opted (rightly) for hydraulic disc brakes.

On the other hand, we appreciate the choice of forks with the Suntour XCR 120mm travel, which offers great value and honest performance for an amateur rider.

The 250W motor is located in the rear hub.It’s an option that’s far less efficient than the mid-engine in ATVs, but it’s also the most economical.Indeed, to benefit from such equipment at Decathlon, you need to invest an additional 800 euros and switch to the e-ST900.This engine has been developed in partnership with the Chinese firm Vision and offers 42 Nm of torque which is enough to overcome some nice bumps but will not be enough for an “All Mountain” practice for example.

More than the engine, it’s the torque controller, which is supposed to animate it, that has been modified between the previous model and this V2.This sensor is now designed by Decathlon in its Dieppe factory, as is the software solution it embeds.This is designed to improve engine performance for a more natural feel.In fact, we are no longer faced with a basic engine that foolishly and immediately deploys all the power it is capable of.There is indeed a noticeable variation under the foot depending on the intensity of the pedal stroke, but it is not obvious.

As for the assistance itself, while we appreciate that Decathlon has limited the choice to three levels (weak/medium/strong), we wonder about its setting.Indeed, at the highest level, it is sometimes enough to put one’s foot on the pedal when it is in the up position to be carried away. Of course, I’m going to purchase this amazing bike.

This is a deliberate choice on the part of the manufacturer and the explanation is actually quite simple.The torque sensor on a hub motor is, by definition, less accurate than on a central motor.In the case of the e-ST500, it does not capture power from both sides and the assistance mechanically starts up as soon as the rider reaches 20 RPM (revolutions per minute).On the two lowest assistance levels, this setting prevails and makes sense.However, for the highest level of assistance, engine torque is available immediately.It is a setting that is perfectly suitable for a demanding practice, in the mountains or on a very technical path for example, but it is not in line with the design of the e-ST500 nor even with its motor power, which is too limited for an “All Mountain” practice.

In the end, Decathlon’s efforts are appreciable and bring a plus compared to other electric bikes at the same price level.But we are still far from the sensations provided by Bosch or Yamaha engines.

The e-ST500 v2’s favourite terrain is of course the forest, with its muddy “singles” and the bumps in between.However, we have also chosen to test Decathlon’s VTTAE in an urban environment as a “velotaf” solution.On this point, the e-ST500 surprised us pleasantly.Despite its massive tires with imposing spikes, it’s quite pleasant on asphalt.The riding position, which is relatively high for an ATV, gives it a surplus of arguments when it comes to taking to the road.As for the 72 cm long hanger, while it’s not ideal for rushing into small spaces, it offers a welcome extra measure of control.

However, the e-ST500’s favourite terrain remains nature.And in an outdoor environment the Decathlon VTTAE is doing quite well.We particularly appreciate the geometry of the well-calibrated frame with short chainstays that make it look like a “muscular” mountain bike.In fact, the e-ST500 is almost as responsive as a conventional mountain bike and can be adapted in no time at all for anyone new to power-assisted cycling.

Finally, on the fringe of pure driving, one might expect an actor such as Decathlon to develop a mobile application for its electric bikes.It could be used to monitor the performance of your ATV as well as to anticipate its maintenance.According to our information, this solution is being seriously considered by the equipment manufacturer, probably for its next generations of electric bikes.

Decathlon does not take the risk of indicating a minimum mileage for its ATV.On his website, the sports specialist indicates that the 420 Wh battery should be enough for 2h30 of sports ride.You actually have to look in the documentation and activate a code to arrive on a page that estimates the autonomy of the bike according to the owner’s size and practice.In fact, the 420 W battery, made up of LG cells, offers performance that is quite suitable for an EVA at this price level.It obviously depends on the morphology of the cyclist and the type of route taken by the bike.But it also varies significantly depending on the desired dose of assistance.At the second level of assistance, out of three, we managed to reach the 70 km range on a relatively flat, urban route.On the other hand, in the forest on a particularly muddy and hilly terrain the battery seems to suffer in a consequent way.After an hour and a half of walking and some 20 km covered, we had exhausted half of its capacity.In any case, the standalone performance of the e-ST500 remains very honest considering its price.

This second version of the Rockrider e-ST500 is a welcome development.Decathlon’s new entry-level electric ATV gains in reliability and riding comfort.The work done by the manufacturer on the torque sensor is quite rare for a 1200 euros bike and deserves to be highlighted.Nevertheless, to catch up definitively, Decathlon should have agreed to equip its VTTAE with hydraulic disc brakes and a transmission worthy of the name.Nevertheless, these defects are mitigated when the overall quality of the e-ST500 is related to its price.There’s no doubt that it’s a great way to discover electric ATVing. 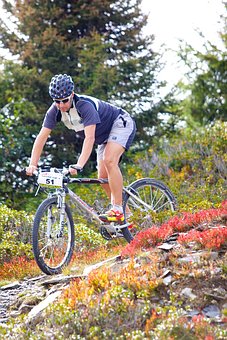